“Once upon a time…” This would be a way to start the video narrative zaldun beltza. However, this narrative (to exist) is anything but linear: The main character, who makes his first appearance in the first frames of the video, is offered to us as a biker dressed completely in black that spreads between the landscape with the aid of a red smoke grenade. Then, we follow is journey on the asphalt without apparent destination which reminds us (purposely) of the cinematographic universe, where the ound takes on an essential component extending the image.

Our Black Knight lead us to a universe that is something lost in the recent past film and simultaneously recognizable to the viewer which quickly reminds us of images, pictures and sensations. This is so, as in other works by this author, a set of stereotypes, a game about the emergence of identities and fleeting Uncanny. Moreover, the aesthetic concerns and the formal work reflect an analysis of the video medium per se, but at the same time of the television medium (where historically it derives). 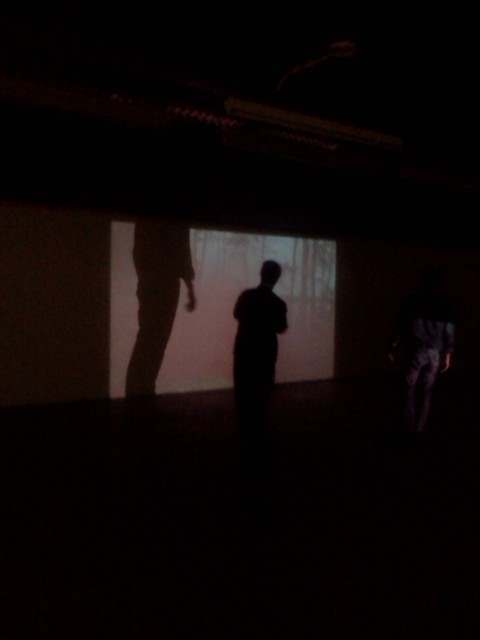 But should zaldun beltza represent a return to the past as a pose: a trip to the future? When we see this figure, the dark knight facing the camera, is not that the general main idea, although this could be one possible interpretation. There is, however, a thought that sits over the duration of the work and acts as if it had been filtered thousand times, an idea that may seem unique to the artwork. It is as if the performer’s body strapped to the machine (outdated compared to modern times) had waited for that moment to happen and to make it known.

Since we are used to find videos in contemporary exhibitions, this work is confused (by analogy) with its own space (a garage where it was first shown in 2011) and leads us to the identity, for a set of identities, for memories and déjà vu. In short, this work without bypassing the horizon line that usually David Etxeberria explores reacts to the unpredictability of contemporary production with a familiar feeling of yesteryear.